The California Science Center dates to the first State Exposition Building, which opened in 1912 and displayed simple, agriculturally-based natural resources and industrial products from across the state. After World War II, technology-based businesses began to grow so the State Exposition Building was remodeled to show visitors the role of science and technology in everyday life. The building was renamed the California Museum of Science and Industry in 1951 to better reflect this new objective. In 1998, the museum transformed into a new kind of public institution for science learning, the California Science Center. 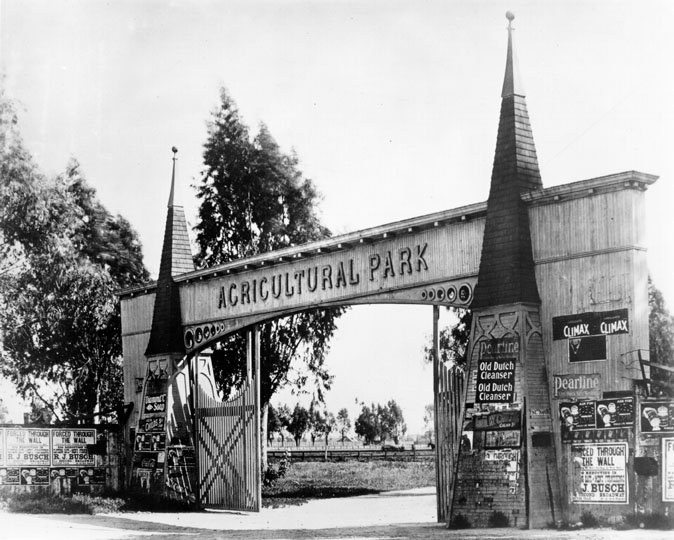 Previously a racetrack and fairgrounds, Exposition Park, then known as Agricultural Park, is purchased by the State of California, the County and City of Los Angeles. 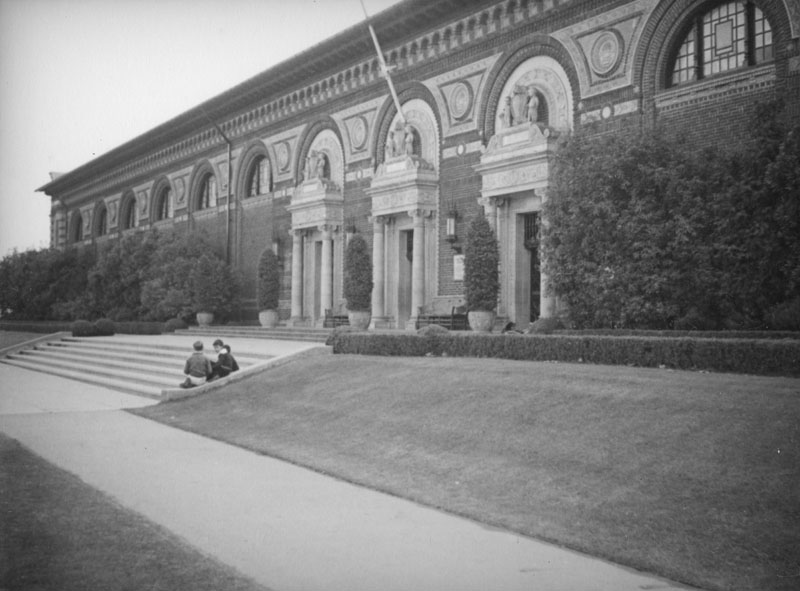 State Exposition Building is remodeled and becomes the California Museum of Science and Industry.

Museum leadership begins strategic planning about the future of the California Museum of Science and Industry and begins developing a three-phase, 25-year master plan, including the moonshot idea of displaying one of the still-active space shuttles in launch position!

The museum begins its transformation into a new kind of public institution for science learning. 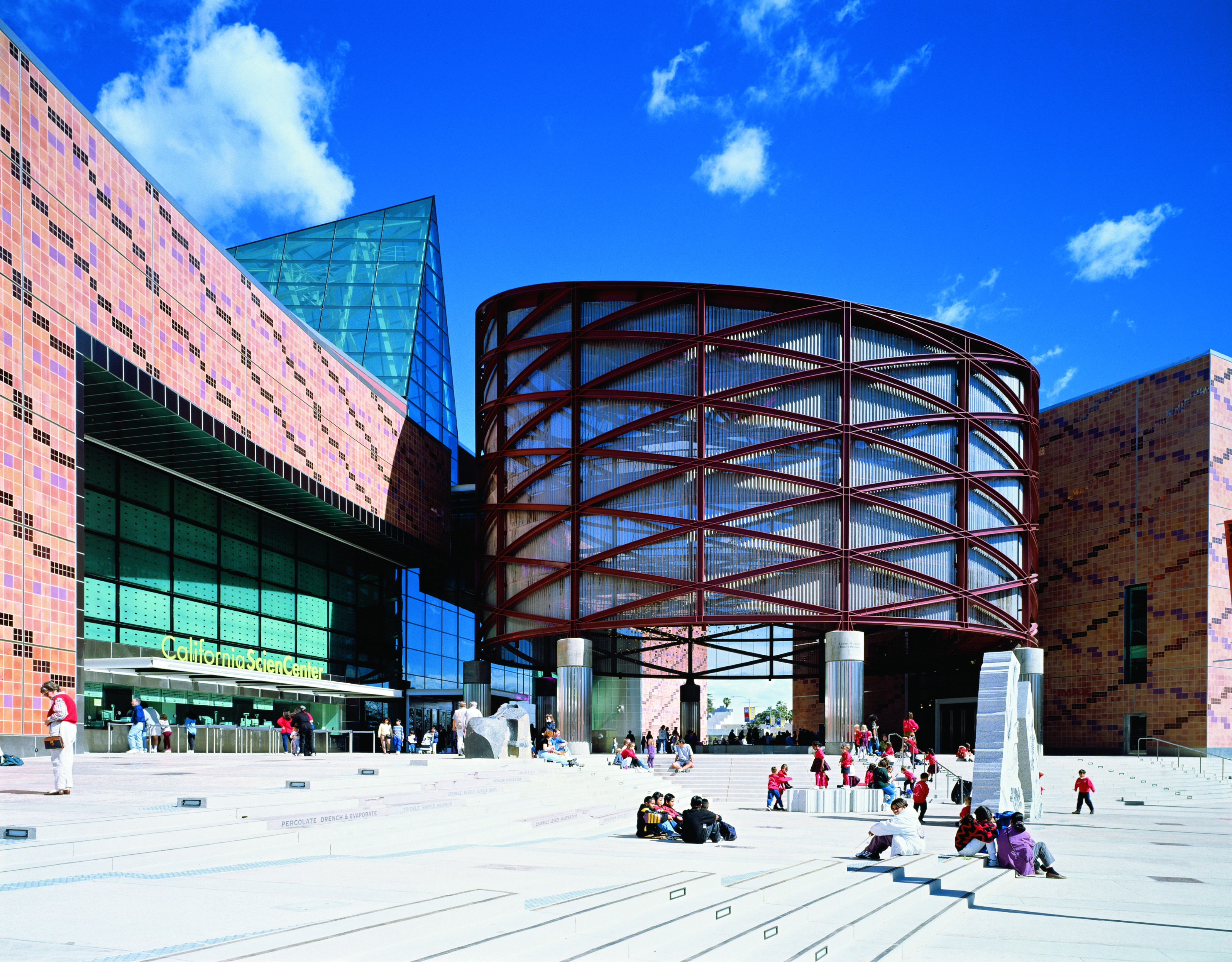 Phase I is complete and the California Science Center opens with a 245,000 square-foot complex, consisting of two permanent hands-on science learning galleries World of Life and Creative World, a special exhibits gallery, a conference center and IMAX Theater.

A part of Phase II, the SKETCH Foundation Gallery Air and Space Exhibits opens, a temporary gallery featuring interactive exhibits as well as artifacts on continuing loan from NASA and the Smithsonian Institution. 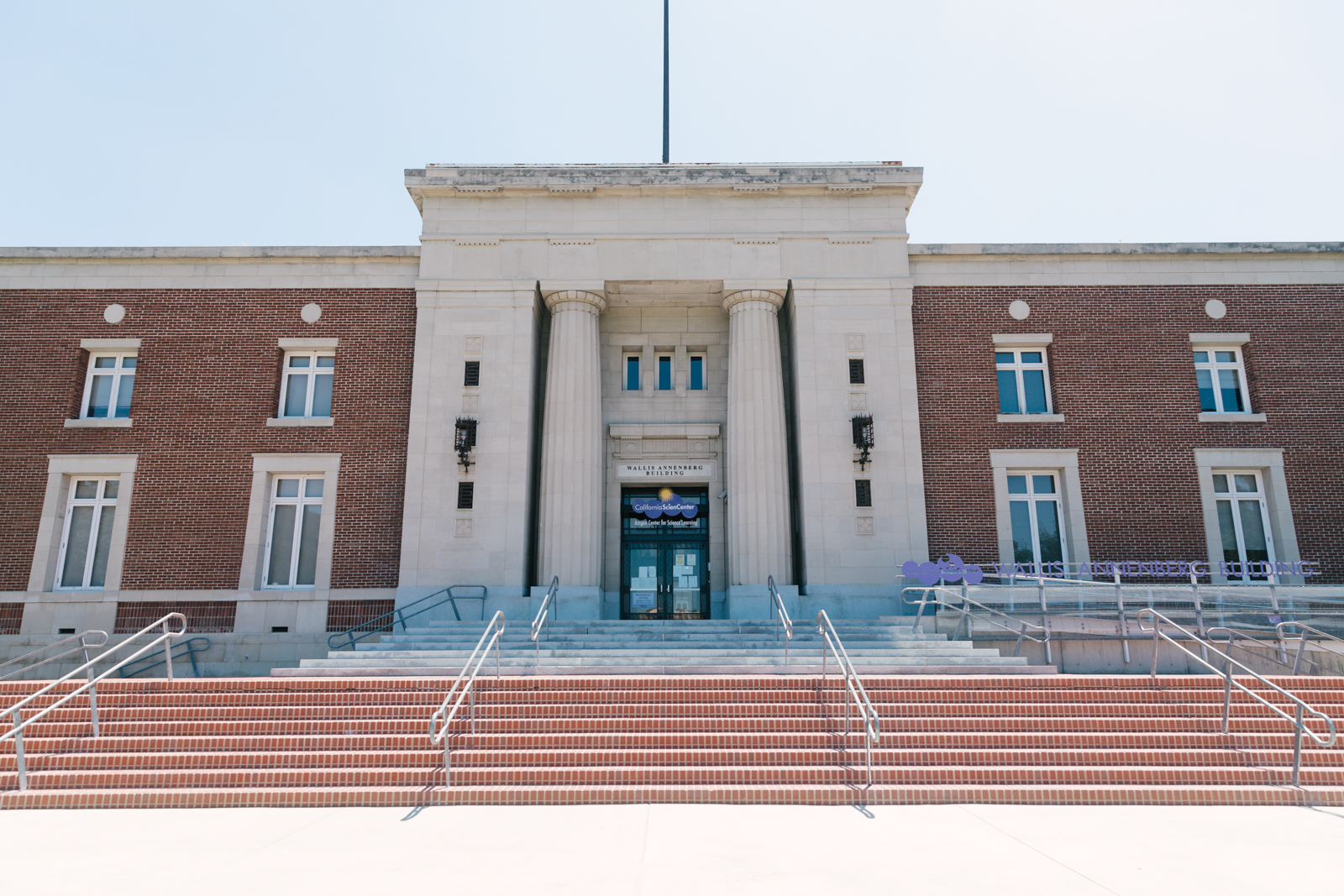 The Wallis Annenberg Building for Science Learning and Innovation opens as the site for the TK-5th grade Science Center School, and labs and classrooms for Science Center education programming in the former California National Guard Armory building.

Phase II is complete with the opening of Ecosystems, a permanent exhibition wing featuring more than 200 live plant and animal species and hands-on science exhibits in 11 immersive environments. Highlights include a 188,000 gallon kelp tank populated with live kelp, fish, and other marine life, a desert flash flood, and a special gallery dedicated to the urban ecology of Los Angeles. The Ecosystems experience empowers explorers with the science knowledge to become better stewards of the environment. 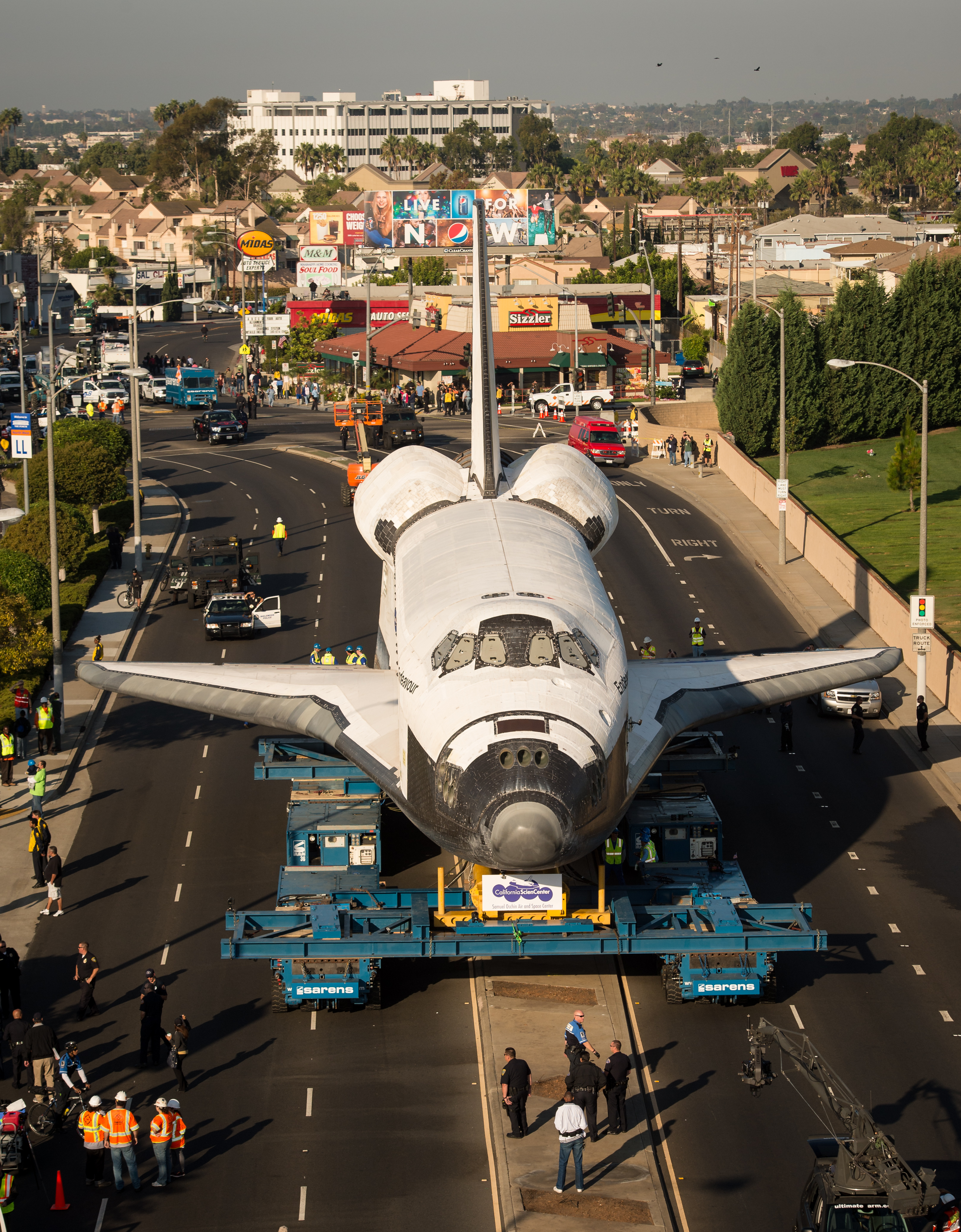 After a flight across the country on the back of a 747 and a momentous journey through the streets of Los Angeles and Inglewood, space shuttle Endeavour opened to the public in the Science Center’s newly built Samuel Oschin Pavilion on October 30, 2012. The Samuel Oschin Pavilion also features SPACEHAB, a workshop for astronauts while in space, and a space shuttle main engine (SSME) which helped push the shuttle into orbit. 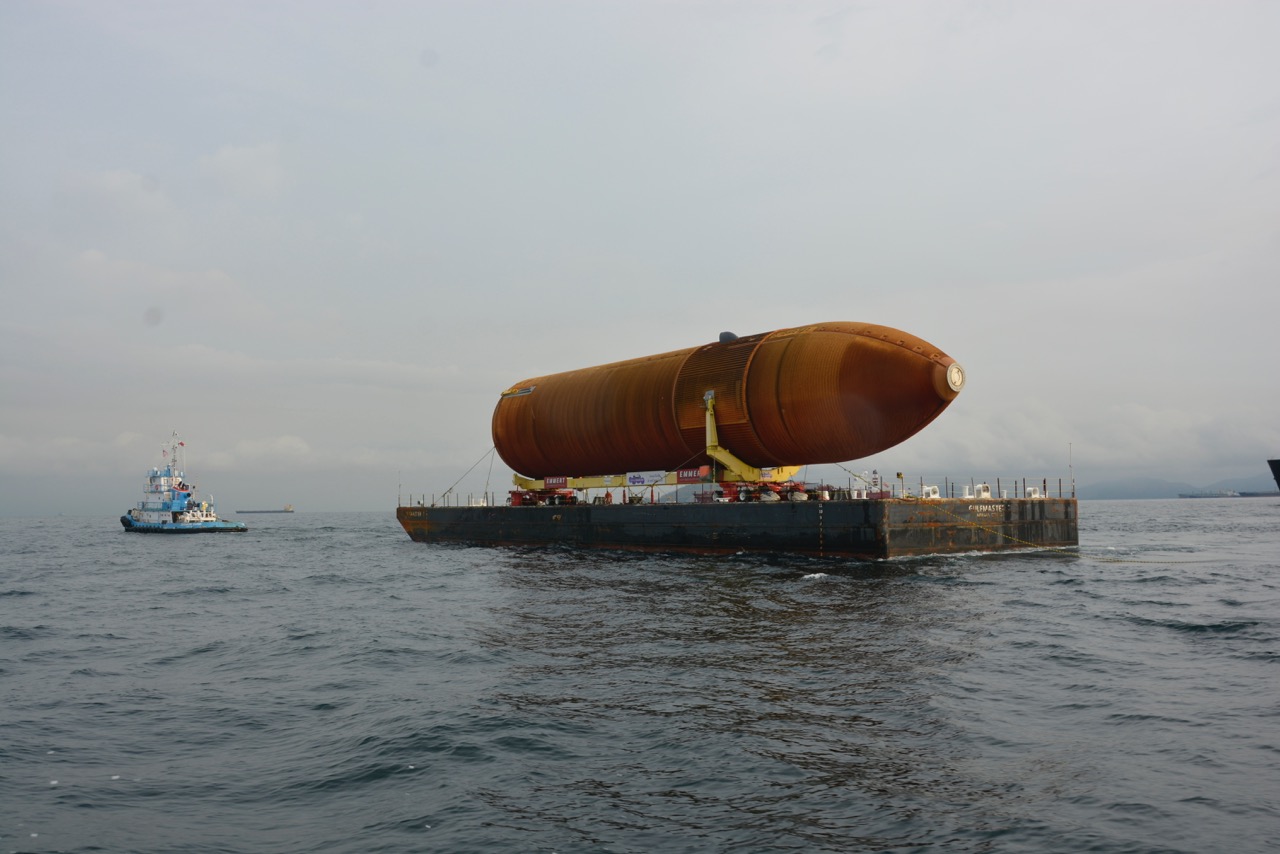 Following an eventful 4,400 nautical mile journey from NASA’s Michoud Assembly Facility in New Orleans, Louisiana to Marina del Rey, California, ET-94, the last remaining Space Shuttle external tank, was transported through the streets of Inglewood and Los Angeles to the California Science Center. Guests can currently see ET-94 outside the Samuel Oschin Pavilion. In the future Samuel Oschin Air and Space Center, Endeavour will be mated to ET-94 and real solid rocket boosters to create the world's only Space Shuttle System, complete with real flight hardware.

The California Science Center marks its 20th Anniversary since opening to the public in 1998 as a reinvention of the California Museum of Science and Industry, welcoming over 33 million guests in those two decades.

The California Science Center temporarily closes to the public in response to the coronavirus pandemic. Staff develop online programs to continue our mission to inspire science learning in everyone.

The California Science Center is being developed according to a 25-year, three-phase Master Plan, outlined below. Phases I and II have been completed and have already transformed the Science Center into a premier public institution for science learning.

Phase I was completed in 1998, and another significant milestone in the Master Plan was achieved in 2010 with the opening of Ecosystems, the centerpiece of Phase II. The best is yet to come in Phase III as we build a permanent home for space shuttle Endeavour.