...if there’s any truth to the movie Inception? (with Karen Konkoly) 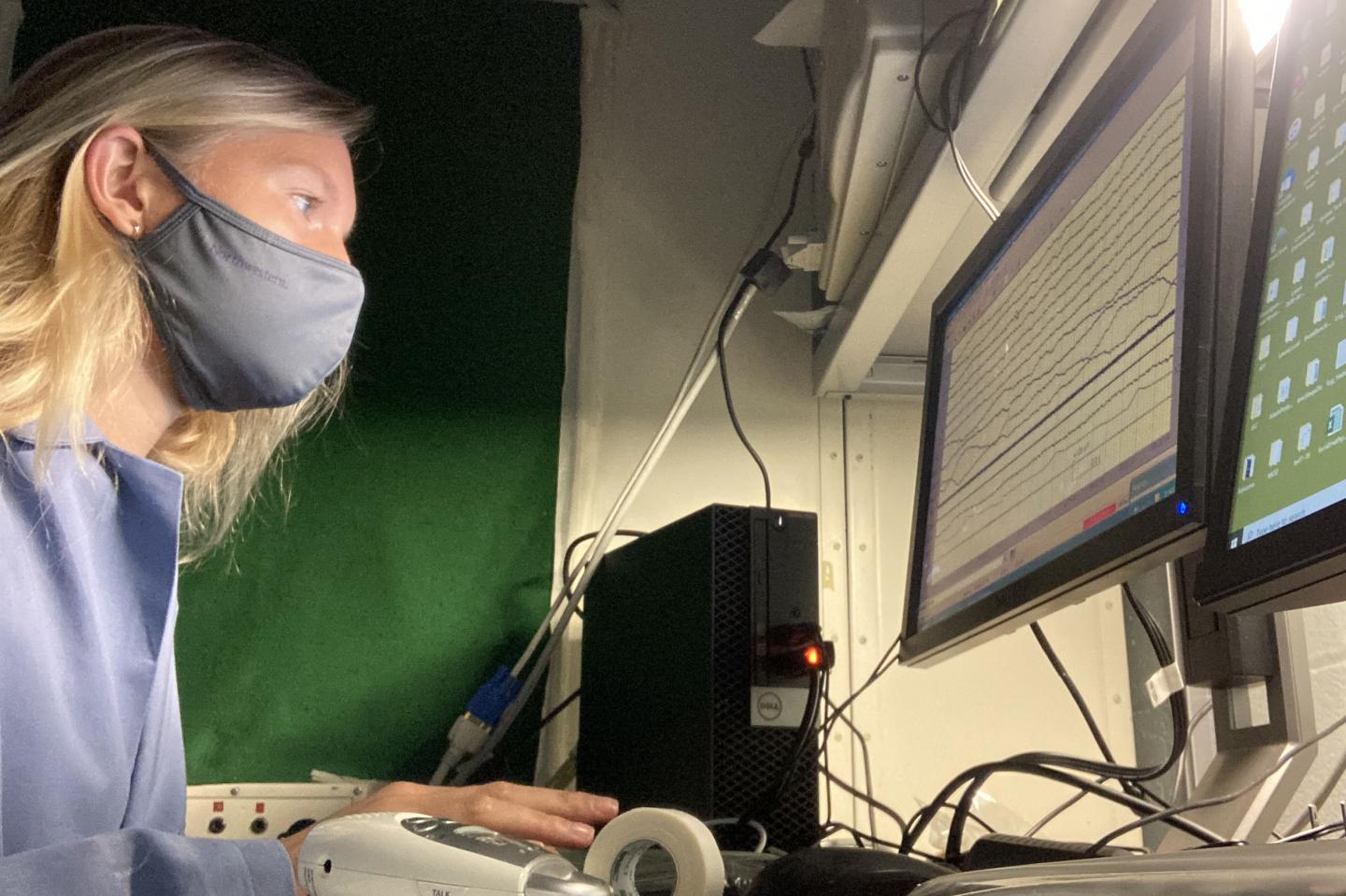 One of my all-time favorite movies is Inception. No joke, I recently rewatched it, and even though it came out over a decade ago, it still holds up. Between the character’s adventures in different dream levels and the manipulation of time in the story, I still find myself picking up on new details when I watch it again for the umpteenth time. It’s all great movie magic, but…

Ever wonder if there’s any truth to the movie Inception?

Karen Konkoly is a graduate student researcher in psychology at Northwestern University. We recently talked to her about her work studying lucid dreaming. And in this short episode, we ask Karen to help us sort out the sci-fi movie magic from real dream science.

Hello! This is Ever Wonder? from the California Science Center. I'm Perry Roth-Johnson. One of my all-time favorite movies is Inception. No joke, I recently re-watched it, and even though it came out over a decade ago, it still holds up. Between the character's adventures in different dream levels and the manipulation of time in the story, I still find myself picking up on new details when I watch it again for the umpteenth time. It's all great movie magic, but... Ever wonder if there's any truth to the movie Inception? Karen Konkoly is a graduate student researcher in psychology at Northwestern University. We recently talked to her about her work studying lucid dreaming. And in this short episode, we ask Karen to help us sort out the sci-fi movie magic from real dream science. Okay, let's get into it.

I was wondering if we could do a lightning round, uh, about another favorite movie of mine Inception, cause it's about dreaming. Uh, I wanna see if some of the things in the movie are just sci-fi, you know, made up with movie magic or if there's some element of reality to them. I don't know. Let's call it sci-fi or real. Okay. You ready to play Karen?

All right. So in the movie, the main characters carry what they call totems small items like a toy top that they carry with them to tell if they're in a dream or the real world. So sci-fi or real?

Partially real. So people can use certain objects to help them figure out if they're dreaming. So for instance, uh, a fairly reliable one is to use something that has text on it. So like for instance, if you wear a bracelet or even maybe have a tattoo that has words on it, it's really common for words to get changed or distorted in a dream. And so if you have a bracelet, you can use it to do something. We like to call a reality check where when you're awake, look at it, really think about it. Like, are you you dreaming or awake right now? And you can say, okay, well if the words stay the same, then you're probably awake. But in a dream, if you read the words, look away and then read them again. It's likely that the words will change. And so that is one thing that's a little bit like a totem in a dream. Um, and there's a lot of other things you can also use as reality checks for plugging your nose and trying to inhale with your plugged nose. But critically, they don't always work in dreams that well, unlike totems in Inception. And so you really have to like think critically, you have to doubt a little bit that you're awake when you do it during wake, in order for it to be successful in a dream.

Okay. Uh, just curious, like, do you have a bracelet or something that, that, that you've ever used for this?

I used to have a bracelet and I was one time, um, supposed to use it. I was gonna give a talk that night and I woke up and one of my, um, you know, tests of if I was in a dream or not was if the bracelet was gone and you know, if I wasn't wearing the bracelet, I would know I was dreaming. So I woke up and I look at my wrist, I'm not wearing the bracelet. So I'm like, okay, I'm dreaming. I'm having an anxiety dream about the talk. And so I look around my room, I'm trying to demonstrate that I'm dreaming and everything really seems really real, but I must be dream dreaming. I'm not wearing the bracelet, but you know, I couldn't find any reason why I was dreaming. So I decided to start my day and go to the gym. So I started running down the hill to the gym and in the direction, the other direction, a guy runs past me and his arm comes up and I see the bracelet on his arm. And I'm like, still a dream. Like this would never happen. What a weird, you know, egocentric, coincidence and then he's wearing headphones. So he keeps running and I turn around and start running after him. I'm like still a dream, you know, I'm chasing somebody, this would never happen. And then I finally catch him and get my bracelet back. And it was indeed, you know, I was awake the whole time and it was a very dreamlike situation and I since actually lost the bracelet. And so now I don't have one anymore.

Okay. Okay. So that, that, that was the first one second one characters in the movie take a medical IV drip sometime to enter the dream world and stay lucid sci-fi or real?

Partially real. We don't have any medicine right now that will make you fall asleep and enter a lucid dream. But there is a medicine that works. If you, you know, if you fall asleep on your own, it can help you have more lucid dreams. It can make your dreams more vivid. It's called Galantamine and it helps with Alzheimer's. And basically if you take it in the middle of the night, the way that it changes your brain chemistry is that it doesn't really do anything at all while you're awake. But when you're in REM sleep, it makes your dreams more and it helps you have lucid dreams.

That, uh, that is very interesting. I didn't know that. Okay. Last one. While sleeping the characters, listen to a French song and French speakers. I'm so sorry. I took Spanish in high school. I think it's Non, Je Ne Regrette Rien to help them like move through between dream levels. Is that sci-fi or real?

Yeah. So we don't really have any data about dream levels. Uh, that was part of Inception that hasn't really had an, an analog yet in science. Um, so for instance, in, in Inception, in the dream levels, each level, time go is slower. And at least in the dreams that have been studied in the lab, there's not a clear, it doesn't really seem like time's going slower. For instance, if you ask a lucid dreamer to count to 10, it takes approximately 10 seconds in the real world. Of course, we've all had dreams that have lasted for unrealistic amounts of time, like several days or something like that. And so there there's one hypothesis that dream time is more like a movie and, you know, a movie can happen over several years, but it, you only watch it for two hours. Um, but it's an open question how time's working in, in general dreams. Um, so because I'm not sure about the, the dream layers, I don't know if a French song could move you between them, but I will say when we ask people, um, you know, when we're asking people questions during sleep, that can kind of alert them to the fact that they're dreaming. And so it can give them another perspective about what's going on. Um, and one time when I was camping, I was sleeping next to my boyfriend and he was snoring and I was in the dream and I heard his snore and was like, oh my gosh, the snore is the real reality. It's the truest reality and everything in the dream dissolved. And it was just, just the snore. And so in that case, the sound kind of moved me a level, a level up. It was more real than my dream I guess, so, um, yeah.

Very cool. That's our show, and thanks for listening. Until next time, keep wondering. Ever Wonder? from the California Science Center is produced by me, Perry Roth-Johnson, along with Devin Stewart and Jennifer Aguirre. Liz Roth-Johnson is our editor. Theme music provided by Michael Nickolas and Pond5. We'll drop new episodes every other Wednesday. If you're a fan of the show, be sure to subscribe and leave us a rating or review on Apple Podcasts. It really helps other people discover our show. Have a question you've been wondering about? send an email or voice recording to everwonder@californiasciencecenter.org, to tell us what you'd like to hear in future episodes.